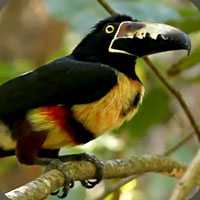 Costa Rica has become a favorite destination for birdwatchers, because there are over 700 species living here, and the number of species is actually growing! How could that happen? Because Nicaragua and Panama have a lot of disturbed forest areas, and so species that used to live only in those countries are finding it easier to expand their ranges into Costa Rica.

Anamaya is surrounded by primary and secondary forest, and we’ve planted many trees specifically to attract birds, such as the Capulin tree, which has tiny seeds along all its branches, and is especially a favorite of green parakeets. The habitat here thus attracts a great variety of birds onto or next to the property. We border the Rio Montezuma gorge, and there you can see water/river birds such as kingfishers and herons. 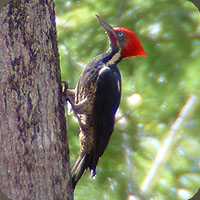 We are high on a point, and many large birds can be seen roosting in nearby trees, or flying overhead. In addition to the two common vulture species (turkey vultures and black vultures), we see laughing falcons, caracaras, and many species of hawks. You can often see the large birds of prey sitting on a stout branch of the huge guanacaste tree that sits in the center of the property, scanning the ground for something to eat.

There are several tropical and colorful birds that are around the property daily, such as the mot mot (momoto in Spanish), whose plumage is an iridescent rainbow. We also have long-tailed manakins, which are a small black bird with a tail 2-3 times its body length, a blue back, and a red head. This shy and elusive bird is difficult to photograph because it never seems to sit still. The manakin is a favorite of birdwatchers who visit Costa Rica to see exotic species. We also commonly have onsite Costa Rica’s most impressive woodpecker, the lineated woodpecker, which has a big red crest on its head.

In the morning, one can often hear chachalakas, gliding around the property and making their rooster-like calls. This bird is much like a pheasant, and used to be a favorite target of hunters. We also have a bird of similar habits and size called a squirrel cuckoo. Both of these birds are elusive, yet they seem curious about humans, so one can see them with patience.

Frequent visitors to the property include the area’s “toucan”, called an Aracari. This is a small toucan-like bird with rainbow coloring that travels in small groups and is very curious about people. The large toucans were native to the area, but became extinct in the southern Nicoya peninsula probably due to habitat destruction. There is some effort to reintroduce them to the area, and we feel that eventually they’ll spread here from other areas. We also commonly see larger green parrots and parakeets on the property. Many people ask about the large red parrots (scarlet macaws) that are commonly shown in photos of Costa Rican wildlife. The scarlet macaw was once native to the southern Nicoya peninsula, but was poached to extinction. There are two reintroduction programs in the area, both north of Tambor, but we hope that this amazing species will migrate back to the area.

The best time to see birds is early in the morning… from twilight to around 8am. Many birds are apparently only active during these hours and all but disappear during the rest of the day, although some reappear around sunset. Sometimes during the middle of the day you will suddenly see a lot of birds in the trees around you… a large variety of species apparently having a bird party. Usually that means that there’s an army ant colony marauding nearby. The ants scare out the bugs and the birds eat most of them. There are even types of birds, called ant birds, that living permanently in a symbiotic relationship with the army ant colonies, following them around all day to eat bugs.