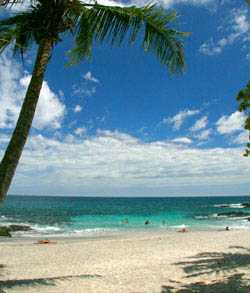 So Anamaya looks great online but you may be wondering about this “Costa Rica” place. You’ve probably heard great things about it, but where in the world is it and what’s it like?

You may be surprised to know that Costa Rica is very close to the U.S. and Canada. It’s only a couple hours flight from Miami. From the east coast, it’s much closer than Hawaii. Most of the major airlines have flights, because Costa Rica has recently passed up Hawaii as the world’s number one destination for adventure tourism.

Costa Rica is covered with jungle and volcanoes, and bordered by ocean on both sides. It has an extensive system of national parks, and the government takes conservation very seriously. Costa Rica is one of the few countries in the world whose forests and jungles are expanding every year, so while its neighbors are still decimating their rainforests for “slash and burn” farming, Costa Rica’s are getting larger. This is in part because of a unique program in which the government pays farmers to regrow their land with wildlife habitat. Every part of this country is gorgeous, from the beaches to the mountaintops.
Costa Rica is truly a blessed place. The country has never been in a war, never been the victim of a brutal dictatorship the way most other countries in Central America have, and never had a revolution. 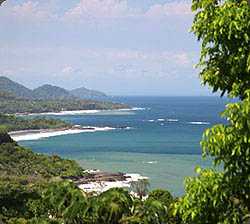 This is in part why Costa Rica was recently listed as “the world’s happiest country” as shown here in an article on CNN: Costa Rica is #1. The United Nations chose Costa Rica for the location of its international University of Peace, which is located in the central valley, since Costa Rica is one of just a handful of countries worldwide that has no army.

The country’s people are not only among the world’s happiest, but also some of the most beautiful and friendly people you will ever meet. They have a motto that you will hear frequently: “Pura Vida” which means “pure life”. You will quickly find that the culture has a focus on family and fun, rather than on consumption and wealth accumulation.

Everywhere you go in Costa Rica, you will experience a place of great beauty, but where Anamaya is located, the Montezuma/Malpais/Santa Teresa area, is one of the gems of the country, which is why Forbes Magazine voted the area to be one of the world’s top ten most breathtaking beach areas: Forbes Article.

So because of all of these unique features about Costa Rica, it has become a favorite place worldwide for lovers of yoga, meditation, wellness, green-building, and all types of ecological and sustainable living practices, and thousands of foreigners have moved here, looking for a more tranquil and healthy way of life. When you visit Costa Rica, you will undoubtedly fall in love with the country just as so many of us have.